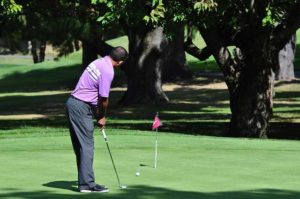 Dave Pelz, recently wrote in Golf Magazine that putting is responsible for “roughly 43 percent of your total strokes.” For a skill that possesses so much importance on the bottom line of our final score, we rarely spend the time to make sure that we are the best putter we can be.

The best putters in the world hone their craft by creating confidence within themselves. They do this by removing all distraction and focusing entirely on making the best stroke for the putt in front of them. Here are the best putting tips to focus your practice on the green and help build the proper foundation for a putting stroke that will have you sinking putts in no time!

One of the best putting tips any coach gives an amateur is how important establishing the best pre-putt routine is for finding consistency in their putting. An easy four-step process begins with lining up the putt. A simple way to line up a putt is to determine if the putt is up or downhill. If the putt is downhill, then move behind the hole and read the putt. If the putt is uphill, then get behind the ball. You’ll find your reads are better from these positions.

Once the ball is set on the line, the next step is focusing on the speed of the putt. Most amateurs miss putts because they don’t have the proper speed on the putt. Before you address the ball, take a few practice swings visualizing the speed necessary for the putt to make it to the cup.

Once you step to the ball and begin the address, focus solely on making solid contact with the center of the club face. Your break has been chosen, and the speed of the putt has been determined. Your work is done. After you’ve addressed the ball, look back one final time at the hole and find a specific area on the back of the hole. Perhaps a blade of grass or a spot where the paint didn’t adequately cover. Bring your eyes back to the ball, steady your head and make the best putt you can.

One of the most significant flaws that amateurs have in their short game is they do not know where they are aimed on their putts. Correct alignment on putts begins with a properly aligned putter face. A great drill for this is to take a smooth card, such as a hotel key card and lay it along the correct path of a putt. Then place the golf ball on back half of the card. Take your putter face and align it with the rear edge of the card. This will set your putter in proper alignment. Use this tactic in your practice, and you’ll be centering putts in your rounds.

Amateurs rarely spend more than fifteen minutes during a range session working on their putting. The majority of their time is devoted to bombing drivers. Next time you hit the practice facility, start with the green and work on drills related to improving the speed of your golf ball to the hole. Take balls and line them up every two feet until you hit the twenty-foot marker. Hit the balls from each distance with an emphasis on learning how each distance feels on the putter.

Then hit your bucket. After you get done, come back and work on accuracy with putts from inside ten feet. Chances are you’ll be a little fatigued from hitting, and you’ll need to additional focus on making these shorter putts. This is an excellent drill for recreating the moments when you need a short putt to save par in a round.

When Making the Read, Pay Attention to the Two Feet Around the Hole

One of the best tips for reading a putt, whether it be behind the hole or behind the ball, is to pay attention to how the putt will finish near the hole if it is struck correctly. Don’t spend a ton of time looking at this area but make sure you cover it with your read. Perhaps the area flattens, and there is little-to-no break over the final two feet. This will affect your line slightly, so it is essential to give this small piece of real estate an extra bit of your attention.

One of the worst stings an amateur can feel during a round is when they reach the green with a  moderate birdie putt opportunity and leave with a bogey due to a terrible three-putt. Hitting better lag putts is one of the best ways for an amateur struggling to break 90 to finally dip their personal best score into the 80s.

A great way to work on hitting more productive first putts is by using a drill that utilizes three tees. You’ll want to start with ten-foot putts and put the tees, nine inches away from the cup on the north, west, and east sides leaving the south side open for the incoming putt to the hole. Imagine the three tees as an outline for a circle around the hole. The purpose of the drill is to stop all putts inside that imaginary circle.

Do not move on to the next distance until all five balls stop in the circle. Once you get complete the task, move the tees out three more inches from around the hole to one foot away and back up five feet for fifteen-foot putts. Repeat the drill. For every five feet longer on the putt, move the tees out three additional inches. This is one of the best putting tips for learning speed as well as accuracy for improving your short game.