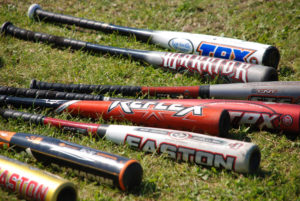 When it comes to baseball, most players know that the material used to make a bat can greatly affect the force that acts on the ball. As a hitter in baseball, the ultimate goal is to hit the ball as hard as possible and drive it as far as possible with the most force that you can. For those who don’t know, there are tons of rules and regulations regarding the material that can be used in baseball bats. In fact, producers of bats are often greatly limited due to the fact that their bats can only have so much strength. In reality, we have the technology to makes baseball bats much more effective with much more pop. However, making them too strong would make things unfair during the game. All in all, everything that has just been said all pertains to the comparison that we are going to make in this article between composite and aluminum baseball bats. As a little extra, we are going to discuss wood bats as well.

Composite baseball bats are considered to be the top-shelf bats when it comes to baseball and softball. When we say composite, we are simply referring to the refined plastic carbon materials that are used in the bat. When composite material is used, it makes the bat more stable and allows it to exert more force upon the ball than other bats do. While composite bats are ultimately deemed better than traditional bats, there are a few things to consider. First of all, many schools and baseball leagues have made rules against the use of composite bats. Also, composite bats are going to be much more expensive than other bats that you will find on the market.

When it comes to the durability of composite baseball bats, they fall somewhere in between the other two options. While they are not as durable as aluminum bats, they are more durable than wood bats are. Composite bats come in either one piece or two. When two pieces are used, it allows for a longer barrel and lower swing weight. For this reason, composite bats may be considered unfair for the fact that they have a lower swing weight. Composite bats are good in the sense that they can allow you to hit further and easier. However, be sure to check whether or not they are legal in the league that you play in.

The majority of baseball and softball bats fall into this category. Aluminum is the most commonly used material in the making of bats. That is because aluminum bats are easy to make and it is not very expensive to do. Aluminum is a material that is sturdy yet reasonably dense. For that reason, it makes for a great bat material. Typical manufacturers add other elements into the mixture of aluminum to strengthen or add efficiency to the bat. One of the good things about aluminum bats is that they are typically legal in all leagues. You shouldn’t have to worry about the bat being illegal as long as you got it within the last few years.

Although we didn’t discuss it, composite bats actually take time to break in. They have to be used for a period of time before they reach their maximum potential. Aluminum bats, on the other hand, are at their full potential the second that you get them out of the box. As we talked about before, aluminum bats are going to have a heavier swing weight than composite bats. While that is true, it typically is not a problem for most batters. When it comes to pricing of aluminum bats, it depends. Like we talked about previously, certain bat manufacturers put other elements and additives into their bats in order to make them stronger. Because they are all created differently, each manufacturer will have their own certain price depending on the quality of the bat. If you are new to baseball or just want something that will work for all occasions, an aluminum bat will work for you.

Wood baseball bats are another option as far as bats go. Most commonly, we see the use of wood bats in the MLB. Major league players have been deemed too strong and skilled to be allowed to use metal bats. The reason that they use wood bats is so that they do not hit the ball too hard. As you could assume, wood bats have less pop than metal bats. So, unless you want to lose the amount of force that you have acting on the ball when you hit it, you probably don’t want to get a wood bat. With that being said, some people still do.

Wood bats are cheaper than other bats. That is because the process used to make them takes less time and less expensive materials. Another thing to note about wood bats is that the sweet spot is noticeably smaller. Unlike metal bats, the ideal area to hit the ball referred to as the sweet spot, is small on wood bats. This is another thing to consider if you are thinking about getting a wood bat. With wood bats being made of wood, they are much easier to break than metal bats. However, it usually saves you money in the long run because they are so much cheaper to buy. Although it seems as if most ballplayers use metal bats, there are actually a ton of producers of wood bats. Lots of people purchase them for uses other than baseball or softball.

One more thing to consider when thinking about wood bats is that the drop of the bat is usually lower than metal bats. That is because the density of the wood is typically harder to alter than it is with metal. Drops are usually 2 or 3 and hardly ever more than a drop 6.

Which Bat Should I Buy?

Not everyone uses the same kinds of bats. Depending on your strength, weight, and size, you will have to get a bat accordingly. As a rule of thumb, most ball players use aluminum bats all the way up through middle school or high school. Around that time, the players who are in private leagues or travel teams sometimes come into contact with composite baseball bats. If you are allowed to use them and you are willing to pay for it, it can be very beneficial. Those who are in high school planning to play in college and possibly further, then you may consider getting a wood bat so that you can get used to it.