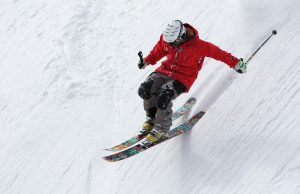 Skiing is the best.

In order to be at your best, however, you need the right equipment. Knowing how to choose and size downhill skis is really important. Get the right skis and you’ll have a blast out there – get the wrong pair and you’ll be miserable.

In this post, I’ll explain how to do this. By the time you’re done reading I’m sure you’ll be ready to purchase a set. 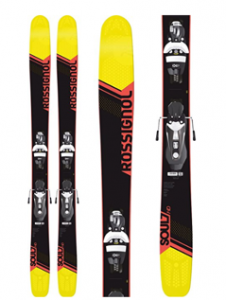 There are several types of downhill skis to consider. First and foremost, there are all-mountain skis. These skis are made for all levels of terrain, meaning they can be used in groomed terrain or mixed terrain.

All-mountain skis are made for people of various ages, both genders, and multiple skill levels. They can make deep sidecuts with ease, and they often come with rockered tips to make turning all the easier. They are narrower at the waist, too. In groomed terrain, they hold an edge without much frustration, and higher end models can even satisfy the needs and desires of expert skiers.

Take A Look At My Top Picks For All Mountain Skis

Powder skis have the widest waist available. They are perfect for both powder and backcountry skiing, but they are not the best choice for using on groomed terrain continually. The deeper the powder snow, the better this model will perform. 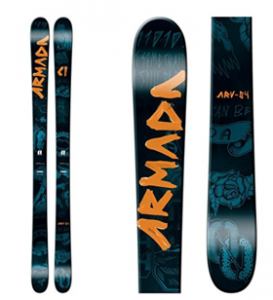 Check Out My Top Picks For Powder Skis

The waist widths are different between genders, with men’s being 109mm and women’s being 100mm. This difference allows for people of different builds to find the best floatation and maneuverability possible. At the same time, it prevents edges from catching in the snow. They are not meant for precise turns, though.

Backcountry skis are best used in untracked wilderness terrain, but it can also be used on powder or groomed runs, too. When climbing skins are added to these skis, they can be taken uphill with ease for the sake of reaching fresher snow that is untracked. However, these skins need to be removed when a downhill run takes place.

Mountaineering skills are suggested for the skier to possess, especially when it comes to avalanche awareness. These two skills will make sure the safest situation possible happens for every skiing experience. They are lighter, which makes them great for climbing. Their waists can be more narrow or wider. The more narrow the waist is, the better they will turn in the harder snow, and wider waists are made for powder snow. 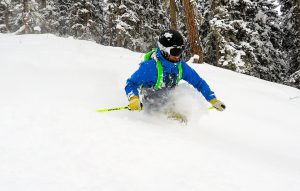 Kids’ Downhill Skis are not necessarily made for children to grow into, unlike children’s clothing. Young children who aspire to learn how to ski need skis that are fit to their current size. There is a simple measuring guide to go by that works for most children.

Children over the age of twelve can begin to consider adult-sized skis. It is also important to note that children have an easier time with shorter skis, but they might struggle with longer skis. Therefore, when in doubt, go with a shorter ski for children.

Check Out My Top Picks For Kid’s Skis

Sizing a ski is pretty easy.

When it comes to height, it is a general rule that the tip of skis should land between the nose and eyebrows with the ski tails on the ground. At the same time, skill and ability lives can dictate whether or not to go with a longer ski or a shorter ski. Again, shorter skis are often easier to maneuver than longer ones.

Weight plays a large role in the type of sky to purchase. People with larger frames will often find that longer and wider skis are better for helping them to maintain balance and stability. Extra mass often provides leverage for turning with longer skis, and the extra surface area is great at distributing weight evenly.

As a matter of fact, one of the greatest considerations of which ski to purchase is the comparison between a person’s height and weight. People who are shorter would obviously want a shorter ski unless they have a lot of experience in skiing.

Then, they might want a longer ski. Much the same can be said of people who are taller. People who weigh more need to make sure that the ski provides stability to avoid injury.

Experience levels are one of the final, key things to consider when sizing downhill skis. People with short skis find that they have more control with turns, so a novice would probably benefit from this type of ski more.

Here’s a video that helps in this department:

Not too bad, right?

In most cases, the dimensions of a downhill ski are measured in millimeters. There are three spots on the ski to consider for measurement. The two, widest parts are the tip and tail, and the skinniest part is often the waist in the middle.

The tip is also called the shovel because of how it initiates the turning process. The wider the tip, the more it will float easily on snow. Harder snow requires slight slimmer tips with even slimmer waists. These measurement comparisons are best for short-radius or carved turns in various types of snow.

The waist is the utmost critical measurement. The narrower a waist is, the faster a pair of skis can go. They are usually meant for groomed runs. It is also easier to shift from one edge to the other with skinnier waists. Wider waists allow for more contact with snow, so they are often better for soft snow and powder.

The tail, or the backend of the ski, is what helps in sustaining turns, and they are generally more important for fast-turning with experienced skiers. In other words, experienced skiers prefer wider tails. A wider tail will resist going sideways with fast and tight carving, all the while maintaining speed.

If a wider, sweeping turn is preferred, then the best choice is to go with a tail that is a bit more on the narrow side.

The sidecut or turning radius controls the radius of turns. The lower the number, the tighter a turn can be, making for a shorter radius. Sidecut radius with larger numbers is better off being used for long-radius turns with a fast descent.

When it comes to camber, it is important to note that most skis have a downturned arc that moves in a continuous line across the ski’s length. A skier’s weight should flatten a ski when they step on it, and the base’s length must provide stability to meet the needs of the skier’s weight.

The camber provides energy for moving through turns in order to make it snap back from one turn to another. In other words, it acts as a spring-release mechanism for turning skis.

The rocker is on the opposite side of the camber. In some cases, it is referred to as the reverse camber or a negative camber. The sides of the ski are what resemble the side arms of a rocking chair. They are flat in the midsection and upturned on the ends.

When placed on a flat surface, the midsection will flatten out, and the tails rise off the ground. This happens much sooner than on a camber ski. Rocker skis are often a better choice for powder as it offers greater control over maneuverability during a downhill run.

If you’re a little confused, this video should clear things up:

There are two types of bindings that are often considered as normal for downhill skis. The first type is integrated bindings. They are usually the top choice for mountain skiing, as the bindings are tightly placed together by the manufacturer. More often than not, they have a greater flex to them, which makes for a greater hold on edge, thus allowing for easier turns.

Non-integrated bindings are often the choice of intermediate and advanced skill skiers. They allow for a greater variety of performance, and they can be fine-tuned to an individual skier’s needs. They also have higher DIN release settings, too.

Get The Right Skis This Year!

There’s nothing better than skiing and you need to have the right set of skis to have a good day. There are a few things to consider when making your decision and you’ve learned what the most important is in this post.

If you want to look at my top picks for skis, for both men and women, click here.

There’s a product their for all budgets and skill levels.

I hope you have a great ski season this year!