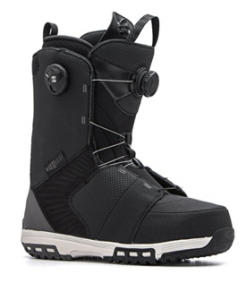 Snow is on the ground and that means one thing – time to buy new gear for the snowboarding season.

If you’re in need of a new pair of boots, you came to the right place. This piece of equipment is essential to your riding experience and you’ll learn everything you need to know in this post so you can make a good selection.

By the time you’re done I’m sure you’ll be ready to buy a pair of snowboard boots.

Let’s get into it.

Snowboarding boots generally come with a flexibility rating from 1 to 10, with 1 being the softest and 10 being the stiffest. New or beginning riders and park riders are generally going to want a softer boot with the most flexibility, while advanced, all-mountain and free riders will generally want a stiffer boot.

The stiffer a boot is, the more quickly it responds to the slightest turn or flex of the foot or ankle. This can be very frustrating to new riders who have not yet mastered the fine motor skills used to steer and guide a snowboard. They need a softer boot that is more forgiving, but also requires a more concentrated movement to steer and turn.

As riders develop better fine motor skills which help them make the minute movements of the feet and ankles which turn and guide their board, they are going to want a stiffer boot that responds to the finer and more minute movements they are mastering.

Park riders, however, still want a softer boot with more flex because of the far wider range of movement they want to have. Park riders will want the ability to quickly transition between tip rolls, grabs, spins and grinding rails. These all require a great deal of flexibility and terrain park riders will want a softer boot as a result. While they may not want as soft a boot as a newbie, they may still want a 5-6 flex rating as opposed to the 9-10 rating that a free rider may want.

How To Size Your Boot 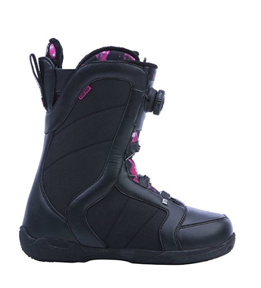 Because riding relies so heavily on the tiniest flexion of the feet and ankles for steering and control, it is hugely important that your boot fits snugly and firmly around your foot. Keep in mind, however, that over time the padding in boots is going to compress and create more space around your foot. This also means how tight you want your boot to be to start with is going to also depend on your skill level and how much use you are going to get out of a particular pair of boots.

Here’s a video that explains how to size your snowboard boot:

Beginning riders most likely want a boot that is snug but relatively comfortable. This is because as your skill level increases, you are most likely going to want to move to a stiffer boot, which means you are probably not going to be wearing this boot long enough to really break it in thoroughly. In addition, you want a slightly less tight boot than an advanced rider for the same reason you want a less stiff boot. The more snugly your boot hugs your foot, the more it will respond to the tiniest movements. This is great for advanced riders, not so great for beginners.

When you are first starting out is also a good time to try and buy used gear. The likelihood is, used gear for beginners is not going to be all that used, because the person that used it probably only used it maybe 8-10 times before being ready to move to more advanced gear. The more advanced your skills are, the longer you will probably use your gear before being ready for new equipment. The longer you wear snowboarding boots, the more they will configure to the exact shape of your foot. Beginners often don’t wear a pair of beginner boots long enough for this to happen before moving to more intermediate gear.

If you are an advanced rider, however, you probably want to buy boots that are slightly uncomfortably tight. This also means you want to wear them around for a while before hitting the slopes with them, because you want to start compressing some of the padding down before you have to spend a day riding in them.

Many boots come with a heat moldable liner, and if they don’t, you can even purchase one separately. Heat moldable liners allow the boot to mold and contour to the exact shape of your individual foot. Remember, the closer the boot hugs every inch and curve of your foot, the more control you are going to have. While you may be used to purchasing shoes that give you a bit of toe room and wiggle room, you actually don’t want this in a snowboarding boot. Ideally, you want the end of your toe to actually touch the boot itself, but not to the degree that it forces your toe to bend.

When it comes to buying boots, your shoe size is a good starting point, but don’t be surprised if you end up with a pair of boots that is a full size smaller than the shoes you normally wear. Boots are also something you don’t want to buy off the internet if possible. Always go into a store and plan on spending a good deal of time trying on boots. Take a good, thick pair of socks with you as well, since that’s what you will generally be wearing when riding.

The more advanced a rider you are, the more different boots you also may need to try on. Since advanced snowboarding boots are very stiff with little give, they are often fabricated for a specific type of leg. If you are short with a thick, wide or well-developed calf, you may need a different boot or brand of boot than someone who is tall and has a very thin calf. When it comes to snowboarding boots, size is not the only issue, but also making sure it works well for your particular leg all the way up to your calf. 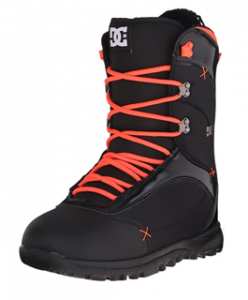 Snowboarding boots come with a wide variety of lacing systems, ranging from boas to double boas, traditional and speed lacing systems. Here is an overview of each and their pros and cons.

Traditional: Traditional lacing is essentially just a very long shoelace. This is somewhat deceptive, however, as the inner lining of the boot also has a lace, so it’s more sturdy and secure than it seems. Probably the biggest positive of a traditional lacing systems is that if it breaks, it’s easy to replace. Also, if you are fashion minded, you can always change out the laces to be matchy-matchy with your snowboarding outfit. Traditional laces give you a lot of flexibility in terms of tightening your boot lower down, while leaving your boot a little looser at the top. The pitfall, however, is that it can be hard to get traditional laces really tight and they can loosen up over the course of the day.

Boa: Boa systems are essentially a wire shoelace that tightens up via a spinning dial located on the front of the tongue of the boot. A single boa has one dial that controls the entire system, while a double boa has two dials, one which controls the bottom portion of the boot and one which controls the top. With a boa system, you can quickly and easily tighten or loosen your boot on the go, which is great for all-mountain riders that may switch from backcountry riding to park riding and want a different tension level for each type of riding. A double boa system is also great for extending the life of your boot, because as the padding in your boot begins to compress, you can tighten your boot tighter and more easily than with a traditional lacing system. The pitfall is that boa systems are the hardest and most expensive to fix if something breaks.

Speed laces: Speed lacing systems – as the name suggests – are one of the fastest ways to get your boots done up and hit the slopes. Each boot manufacturer has a different name for their speed system, but generally they are essentially a harness that you pull tight via one or two handles that quickly lock in place. They can be hard to get as tight as a boa system, but are easier to tighten than traditional laces. If you like a slightly looser feel in your boot, speed lacing systems are probably right for you.

If you’re a little confused, this video will clear things up:

Make Sure To Pick The Right Boots This Season

Selecting a good pair of snowboard boots is essential to having a fun day on the slopes. If you get the right pair you’ll feel good and in control all day long – choose the wrong pair and you’ll be packing it in early.

If you want to check out my top picks for snowboard boots, click below:

My Favorite Snowboard Boots For Both Men And Women

If you have any questions about what you’ve read, comment below and I’ll make sure to respond as fast as possible. You can find more tips on snowboarding and gear reviews by clicking the snowboard section up top.

Are you ready to try out your new pair of boots?