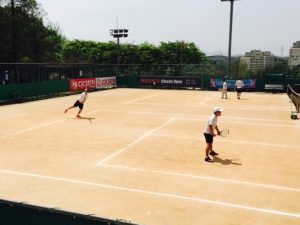 To the casual onlooker a game of doubles might look like a crowded game of singles. Having played both competitively for many years I can honestly say they are like two different sports. It’s true that the same general skill set will be required for both games but the tactics and strategies are extremely wide and varied.

The serve and the volley, whilst very important in singles, are the crux of the doubles game. Groundstrokes are important, especially the return, but someone could become an incredibly effective doubles player with only focusing on the serve and volleying aspects.

There are definitely many tactics, strategies and techniques that cannot all be covered in this article. But generally speaking there are some key strategies crucial for any accomplished doubles player.

A useful starting point to think about any doubles strategy is to think about positioning on the court, in particular the net. If you watch any televised tennis you will realise two players standing at the net at the start of each point. The aim of the game is to get to the net to try and make it as hard as possible for your opponents to lob or pass you. Generally speaking when two players manage to get to the net they will be in an advantageous position and in the best place to win the point (providing they are good at volleys and smashes).

When Your Partner is Serving

You should stand about three to four feet behind the net to give you the best chance to intercept your opponent’s returns. However this will depend on the power of your partner’s serve: if it is particularly slow you will only be making yourself a target by standing at the net. In this case it can make more sense to stand nearer the baseline but this will also give your opponent’s the chance move forward and dominate the net. If you are in a position to intercept your opponent’s return with a volley, you should either aim it at your opponent’s feet (if they are standing at the net) or into an empty space in the court (if there is one).

When Your Partner is Receiving Serve

The best place to stand is the corner of the service box where the service line meets the middle of the court. There are three reasons for this:

Tip: if you find that your opponent’s serve is too strong or just too good, you might want to stand further back in the court. It might be hard for your partner to return the ball where they want to and you will just be making yourself a target for the net player on weak returns.

When You are Serving

The ideal play most of the time is to run straight to the net after the serve. This will give you the best chance to dominate the net and join your partner who should already be there. A few things should be said about the tactics around the serve and volley strategy.

When you are Receiving Serve

The first goal is to keep the shot away from the net player. The second goal is to make it difficult for the server and a good tactic is to play the ball at their feet. A good return in doubles is therefore usually one that is cross court, low and dipping just over the net to land near the service line. This is all assuming that your opponent has a good serve and will come into the net. If they don’t, you can change your strategy accordingly. If they have a soft serve, you can hit your return either at the opponent at the net or cross court at the server before approaching the net yourself.

When Both Opponents are at the Net

From the back of the court, if your opponents both manage to get to the net you will be on the back foot. A good strategy from here is to always play shots down the middle. These can either be dipping at their feet or lob shots in the air. There are two good reasons for this:

When Both Opponents are at the Back of the Court

Both you and your partner should try to approach the net if your opponents are at the back of the court. Realistically there only option is to lob you or try and pass you with force. Neither option is easy and should put you in a favourable position to win the point. Depending on your opponents’ weaknesses you may want to hit to one of their weaker sides if this is obvious. Otherwise playing a shot down the middle of the court is the percentage play as this will reduce the angle with which they can pass you. As with any other shot down the middle it may also cause some indecision about who should hit the shot.

Communicating with your Partner

If you watch professional doubles you will notice the players talking to each other after every point. It’s not only important to talk tactics and strategy but to keep up morale and energy levels. You can talk about any weaknesses you have identified with your opponents or any part of your own game you struggle or excel at. If your game plan isn’t working, discuss trying something new like standing at the back of the court when your opponent’s serve or even when you serve. If nothing else, your opponent’s won’t like you continuously changing your tactics as it will disrupt their rhythm and momentum.

As in all team sports, it’s easy to blame your partner if things aren’t going well but put yourself in their shoes and always remember that attitude and positivity are as important as anything else when it comes to winning. There will be times when you and your partner don’t play your best tennis and this is when it’s important to keep each other motivated and determined. Confidence breeds confidence and it only takes a couple of good shots or points to get you back in a match.