Tennis is one of the world’s most fascinating and popular sports. Combining incredible skill, athleticism and determination it is a sport that can be terribly hard to master but very simple to enjoy. There are so many different shots, strategies and tactics to learn it certainly never gets boring. Like any sport it can be a frustrating experience at first. The following tennis tips for beginners are sure to make the game as enjoyable as possible and put the rising star on the path to progress. 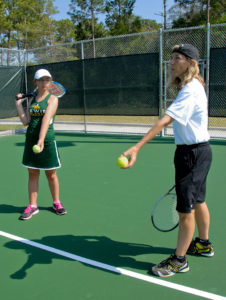 The forehand, backhand and serve are the three most important shots in tennis. Before practising the serve, beginners should spend as much time as possible mastering the groundstrokes. For both the forehand and backhand, players should focus on taking the racket straight back to around knee height and hitting shots where the racket follows through over the shoulder. This is the ideal technique to develop consistent, effective groundstrokes.

Hitting shots with topspin is the foundation upon which to build the tennis game. A good drill to practice for both the forehand and backhand is to hit shots from the service line by ‘brushing up the back of the ball’ and aiming to land the ball just over the net. This brushing action is almost like a flick of the wrists: for a right and player hitting a forehand, think of hitting the ball from the 5 o’clock position to the 11 o’clock position of a clock face.

3. Get the Right Grip

Trying to hit constantly good tennis shots with the wrong grip will be an uphill struggle for anyone. There isn’t one correct grip but when players hold the racket for a forehand, the thumb should be slightly angled towards the target: for a right handed player angled to the left, and vice-versa for left handed players. The same rule applies for the back hand and this grip is optimum for generating topspin on the groundstrokes.

4. Practice with Someone of a Similar Ability

There’s simply no substitute for training and practice but it’s also important to meet up with players who are of a similar ability. If anything you should try to arrange practice sessions with better players as this will force you to hit solid groundstrokes and move quicker round the court. Ideally you want your practice sessions to be just out of your comfort zone and this will help you to improve gradually.

5. Learn Where to Stand on the Court

Knowing where to stand on the court is a crucially important non-technical aspect of the game and can really give beginners the best chance of getting to shots. As a general rule players should stand on the middle of the base line for ground strokes and make sure to return to this spot after each shot. When returning serve, an ideal position is around a foot behind the baseline and closer to the tramlines than the centre of the court (this applies for both backhand and forehand). These positions will vary depending on the level of opponent but the important thing is to find spots on the court where you can comfortably return serves and groundstrokes.

6. Practice Getting into the Ready Position

In addition to returning to the centre of the court after each shot, players should get into the ready position every time. Similar to the ready position for the volley, simply hold the racket in front of you with both hands at waist height. When your player hits their shot, being in the ready position should give you the best change to react quickly and set yourself up for whichever shot you need to play.

7. Learn How to Move Round the Court

Movement round a tennis court is such an important part of the game. Players should master how to side skip along the baseline and how to run backwards for lobs and smashes. A good drill would involve a coach or friend hitting alternate balls to your forehand and backhand whilst you approach each shot from the centre of the baseline with a side step motion. Because groundstrokes will most often be hit from a side-on position, the side step motion allows players to get into position a lot easier. For smashes, players should never turn their back on their opponent and therefore must be comfortable running backwards. This isn’t easy at first and practice is needed to really master these short steps. 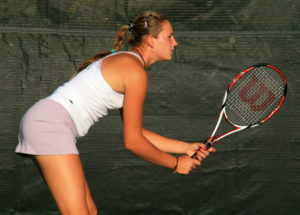 Whilst learning the groundstrokes and the serve are far more important than the volley, this is still a crucial part of the game that must be worked on – especially so for playing doubles. Volleying well isn’t difficult and can be a big advantage for players wanting to take control of a tennis match. Three tips I always try and remember:

1. Hit volleys with a ‘chopper’ grip. Imagine holding a hammer to hit some nails into wood. This is the grip to use for volleys.

2. Hold your racket in front of you at chest height with both hands. This  the ‘ready’ position for the volley and you should try to return to this position after every shot.

3. Imagine wearing a tie round your neck and the bottom end of the tie is tied to the top of your grip (for obvious safety reasons don’t actually try this). Try hitting all of your volleys with this in mind – it will encourage you to move your body and to use a short backswing and follow through. You don’t need to swipe at volleys but instead use the pace of your opponent’s shot to deflect the ball back at them. Think of volleys as short, sharp jabs and this should help with the technique.

9. Start with a Simple Service Action

Trying to master the service action will take months and years of practice so bear that in mind when starting out. For younger tennis players I would even encourage hitting under-arm serves to start with as it can be discouraging to hit numerous double faults. A good way to learn the over-arm serve is to stand at the service line and place the racket behind the right shoulder (for a right handed player). Throw the ball up about three feet above head height and one foot in front of you and practice hitting the ball into the opposite service box. Focus on hitting the ball downwards and transferring your weight towards the target.

It’s important to start off with the right equipment as this will make the experience more enjoyable and give you a better change to develop the correct technique. As a general rule beginners should start off with lighter rackets with bigger sweet spots. This type of racket will help with generating power meaning players don’t have to compensate by trying to hit the ball harder. The best way to find the right equipment is to try as many rackets as possible or speak to your local coach.

Follow these ten tennis tips for beginners and you can’t fail to improve as a player and get more enjoyment out of the game. Whether your 8 or 68 tennis is a game that can be enjoyed at all ages and there’s always room for improvement. Get out there and enjoy the game.